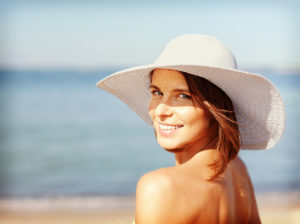 Melanoma is cancer that develops initially in the melanocytes. This type of cancer is also known as cutaneous melanoma or malignant melanoma. A majority of melanoma cells continue to produce melanin and may appear tan, pink, or white.

Melanomas can start anywhere on the skin. However, there is a higher probability of this cancer starting on the trunk (back and chest) in men and on the legs in women. Other common locations include the face and neck. Board certified dermatologist Dr. Jamie McGinness provides skin care treatments to patients in Shiloh, IL; St. Louis, MO, and surrounding communities in this area of the Midwest.

Where does Melanoma Occur?

Heavily pigmented skin reduces the risk of developing melanoma in the more common locations such as back, chest or legs. However, anyone can develop melanoma on the soles of the feet, palms of the hand, and beneath the nails. Melanomas in these locations are more commonly found in African Americans than in Caucasians.

The stage of cancer at the time of diagnosis determines its spread and the type of treatment that is suitable to address it.

A particular method of staging melanoma cancer classifies it in 5 stages ranging from 0 to 4.

Cancer’s location is only in the uppermost skin layer. Melanoma in situ is another name for this stage.

Cancer’s thickness is up to 2 mm. It has not yet spread to other sites or the lymph nodes. It may or may not be ulcerated.

Cancer’s thickness is at least 1.01 mm, and may go up to 4 mm. It may or may not be ulcerated. Cancer has not yet spread to other sites or the lymph nodes.

Cancer has spread further to one or more lymph nodes or adjacent lymphatic channels. However, it has not spread to distant locations.

Cancer has spread to lymph nodes or organs that are far off such as the liver, lungs, or brain.

Different forms of melanomas include:

This is a common type of melanoma. It usually develops on the limbs or trunk. The cells grow gradually at first. However, they later spread rapidly across the skin’s surface.

This is the second most commonly occurring melanoma. It typically develops on the neck, trunk, or head. It has a tendency to spread faster than other types of melanomas.

This is a less commonly occurring form of melanoma. This type of melanoma has a tendency to affect older individuals specifically in parts of the body that have been exposed to the sun for many years.

This type of melanoma is the rarest. It typically develops on the soles of the feet, palms of the hands, or beneath the nails.

Judicious board certified dermatologist Dr. Jamie McGinness receives patients from Shiloh, IL; St. Louis, MO, and other towns and cities in this part of the fruited plain for skin care treatments.