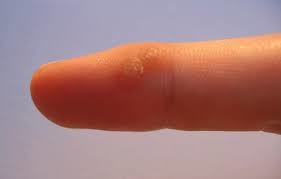 The sudden appearance of warts makes these harmless growths seem like they came out of nowhere. But it is important to understand the causes behind the occurrence of warts. Patients should consult with an experienced skin specialist if they are concerned about the appearance of warts.

Board certified dermatologist Dr. Jamie McGinness provides treatments for warts to patients in Shiloh, IL; St. Louis, MO, and surrounding locations in this area of the Midwest.

Experts explain that HPV is pervasive. Every person comes in contact with it in the course of their lives such as when turning doorknobs, shaking hands, or typing on keyboards.

Scientists have located over 100 different forms of the virus. A majority of people will have at least one common wart at some point in their lifetime, typically on their hands.

How do people get common warts?

In case a person develops any type of skin wart, it indicates that they came in contact with a wart-causing virus at some point in the past. This could even have happened many months earlier.

Experts indicate that while people can get infected with warts from other people, they cannot get warts from toads and frogs. People most commonly get warts due to direct skin-to-skin contact with someone who has warts, such as a handshake with a person with warts on their hand.

The virus can be transmitted from inanimate objects as well, for instance, a towel that has been used by an individual with a wart.

These viruses are more likely to lead to the development of warts if they come in contact with a cut or damaged skin. A tiny cut or bitten fingernail could cause a wart if it comes in contact with a wart-causing virus.

Furthermore, nicks and cuts from shaving could also become an entryway for these viruses. This is the reason why men have warts in the beard are while women usually have them on the legs.

Why do some people get a lot of warts while others do not?

Every person comes across viruses that cause warts. Then why do some people develop skin warts while others don’t? Doctors are not sure about the exact reason for this occurrence. However, they believe that the immune system in some people is more capable of fighting off such viruses preventing wart development.

For instance, kids get skin warts much more frequently than adults. This most likely happens as their immune systems are not yet robust enough to ward off the multiple strains of HPV that they will encounter throughout their lifetimes.

Furthermore, the genetic build and immune systems of some people make them more vulnerable to viruses that cause warts, just like some individuals are more susceptible to poison ivy.

Warts are also common in many siblings in the same family. Children of people who developed skin warts as kids are often at risk for skin warts themselves. Judicious board certified dermatologist Dr. Jamie McGinness receives patients from Shiloh, IL; St. Louis, MO, and other cities and towns in this section of the country for warts treatments.