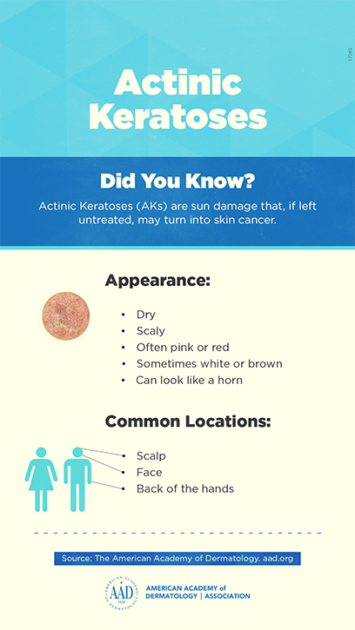 Prompt treatment can remove almost all actinic keratoses (AK) before they develop into skin cancer. Patients with suspicious AK may have to undergo a biopsy which involves having a part of the AK removed with a scalpel or curette (a tool with a sharp ring-like tip).

Scraping the lesion’s base is also possible with a curette. The physician will use an electrocautery needle or apply trichloroacetic acid (TCA) to stop the bleeding, and the patient will require local anesthesia.

The treatments available for AK, depending on the type of growth’s and the patient’s medical state and age, are as follows:

The physician may prescribe a topical gel, cream, or solution if the patient has multiple or widespread AK. These topical ointments can address visible and invisible lesions with minimal scarring risks. This type of therapy is also called “field therapy” as these treatments cover a wide area of skin compared to targeting specific lesions.

For patients with widespread lesions on the scalp and face, Photodynamic therapy (PDT) is particularly useful. The doctor will apply a light-sensitizing topical chemical to the lesions. They will subsequently use a powerful light to activate the topical agent, destructing the AKs while leaving the healthy tissue unaffected.

Some doctors expose the treatment areas t0 sunlight after applying the light-sensitizing agent, rather than using artificial light. This is called daylight PDT and is believed to be gentler than standard PDT.

Physicians may use a combination of therapies to address AKs. In general, the treatment regimens are a combination of cryosurgery with PDT or a topical therapy such as diclofenac, imiquimod, 5-fluorouracil (5-FU), or ingenol mebutate.

The topical meds and PDT can also be alternated every three months, six months, or one year as recommended by the doctor at the follow-up skin exams.

Notably, the patient may experience an increase in sun sensitivity with some of these therapies. Therefore, it is important to check with the physician and be particular about the use of sun protection during the treatment. 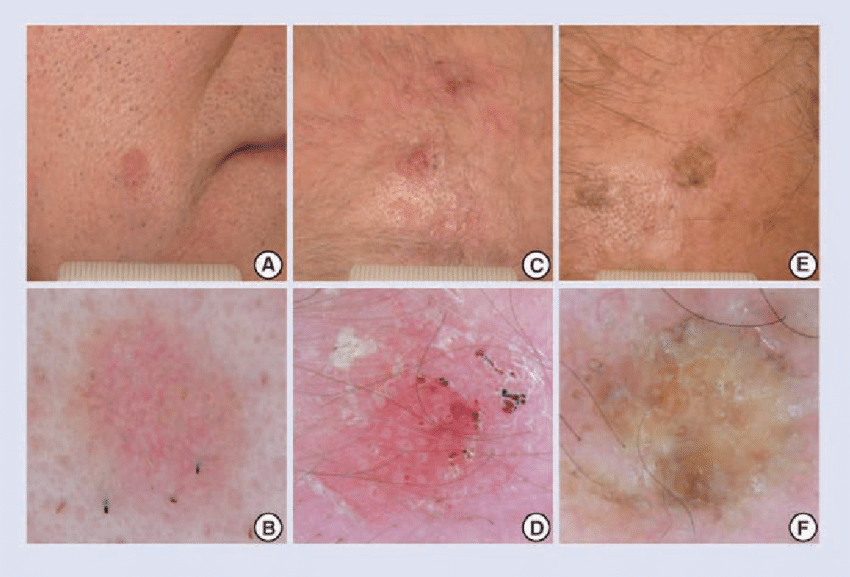 An actinic keratosis (AK) is also called a solar keratosis. It refers to a scaly, crusty growth that occurs due to damage from ultraviolet (UV) radiation exposure. The term “keratoses” is commonly used as it rarely occurs as just one.

If left untreated, AK may develop into skin cancer. It usually develops into squamous cell carcinoma (SCC) which is the second most common form of the disease. Over 419,000 cases of skin cancer in the US annually are connected to indoor tanning.

AK is the most commonly occurring precancerous skin lesion on skin that has undergone frequent sun or UV radiation exposure (such as tanning beds). Rarely, AK may develop due to extensive x-ray exposure. They typically appear on sun-exposed sites such as the bald scalp, face, shoulders, ears, neck and the back of the forearms and hands.

They may also develop on the shins and other areas of the legs. AKs are usually raised, rough, and appear similar to warts. They are commonly red, but some are white, light or dark tan, pink and/or flesh-hued, or a combination of these hues.

At the outset, AKs are typically so tiny that they can only be felt rather than seen. It feels similar to running a finger over sandpaper. In fact, the patient may have many more subclinical (invisible) lesions than those appearing on the skin’s surface.

AKs most often form gradually and attain a size ranging from an eighth to a quarter of an inch. They may also disappear early on and reappear later. Sometimes they cause itching, or a pricking or a tender feeling. They may become swollen and surrounded by redness, and rarely, even bleed.

Why should you be concerned about AK?

AKs left untreated, and those that are older have a higher probability of developing into an SCC. Some researchers view AK as the initial form of SCC. Rarely, AKs may develop into basal cell carcinoma (BCC) which is the most commonly occurring type of skin cancer.

Left untreated, SCC may become invasive and dangerous. Actinic cheilitis is a variant of AK which is usually an aggressive form of pre-cancer on the lower lips. It has a higher risk of developing into an invasive SCC.

After cancer due to actinic cheilitis penetrates the outer lip skin (mucosa, mucous membranes), it can cause bleeding, become infected, develop into a sore that does not heal, and even spread to internal organs.

Around 10 percent of AKs develop into cancers. Most SCCs start as AKs, but there is no method to determine which ones may develop into SCC. There are, fortunately, various effective treatments for removing AKs.

Successful board certified dermatologist Dr. Jamie McGinness and Jackie McGinness, FNP (Nurse Practitioner) receive patients from Shiloh, IL; St. Louis, MO, and other cities and communities in this area of the country for various skin treatments.